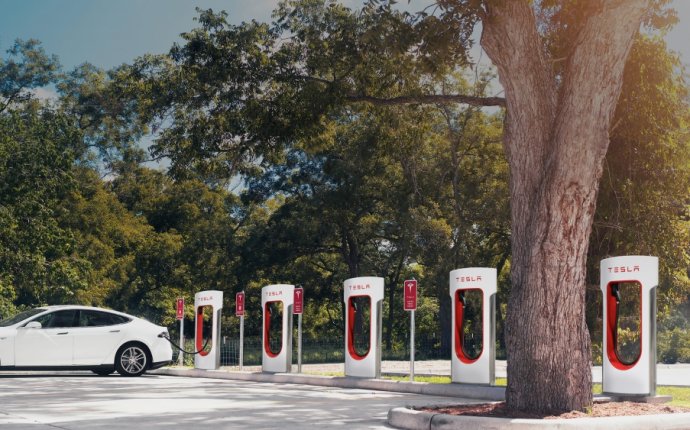 The more electric cars are sold, the more used electric car batteries start to pile up–and right now, manufacturers don’t have many good options for dealing with them. The materials are cheap enough that recycling doesn’t always make economic sense. Batteries sit on shelves, or worse, go to landfill. But a startup has discovered a new use: Using old batteries for mobile charging stations.

The Mobi is a small charger on wheels with used EV batteries inside. Plug in an electric car or two, and the charger quickly powers them up. Because it’s mobile, it also solves a second problem. Instead of driving around looking for a charger or waiting for someone to leave a wired parking spot, people with electric cars can use an app to have the charger come to them.

“People tend to park their cars in a spot and leave it there all day, ” says Arcady Sosinov, CEO of Freewire, the startup making the charger, which spent months studying the challenges of charging cars in employee parking lots at large companies. “So you have this technology which can theoretically serve five or maybe six cars a day, but then you have to really effectively get people to move their cars as soon as it’s done. It just doesn’t happen.”

At LinkedIn’s headquarters, for example, the fixed charging stations in the company’s massive parking lot each serve less than two cars a day. The company experimented with trying to ask employees to come out and move their cars after charging, but that only ended up making people less productive. As Freewire looked at the problem, they hacked together a solution for LinkedIn to test. “It was an ugly-looking prototype–honestly, just a stack of batteries sitting on top of a wheelchair base, ” Sosinov says. “But it solved the problem. We sold them on it right away.” Over the last nine months, the company created a production version of the charger.

The choice to use old EV batteries happened partly by chance. “We’re a startup, we’re small, and we knew we needed the best technology but knew we needed it really cheap, ” he says. “So we went to a junkyard and found a wrecked Nissan Leaf and pulled the pack out of it and started working with the batteries, just because they were inexpensive. But in doing that we stumbled upon something that is obviously a pretty big pain point for manufacturers.”

The batteries are taken out of cars when they’re not putting out enough power anymore, but they typically still have 70-80% capacity left for energy storage. Because manufacturers don’t have a good way to use them, Freewire can get the batteries for almost nothing. “It means we can serve markets using battery technology that couldn’t have been served before, just because the economics didn’t make sense, ” says Sosinov.

The whole system is also cheap enough that the company can afford to pay a parking lot attendant to physically wheel the charger between cars. They initially considered a self-driving version. “We had this whole sketch like the robot from the Jetsons, Judy, ” Sosinov says. “But we were honestly cheap enough that if we have five of these onsite, the cost of labor kind of goes away.”

It’s also a cheaper approach for companies that want to add more charging stations. Instead of tearing up pavement to add wiring in fixed locations, they hire Freewire’s charging as a service.

Now, the company is beginning to scale up their systems. Soon, they’ll be deploying an army of chargers on Stanford University’s sprawling campus, sending the units from parking lot to parking lot as needed. They’ve also approached Uber about the possibility of giving drivers a unit to keep in their trunk–so when a driver has some extra time, they could potentially provide on-demand charging for anyone anywhere in a city.

Freewire is also pioneering another use for the old batteries, turning them into replacements for noisy, polluting diesel generators. They recently tested their devices at the Rose Bowl, which often uses 160 generators for large events. “It provides the same amount of power, but it’s clean and quiet, ” says Sosinov. “It’s kind of a no-brainer.”

And as the company starts to get more attention, it’s getting calls from more battery companies eager to offload their used products. “They’re spending tons of money storing these batteries, ” he says. “We’re the first company they’ve seen that can extract value.” And also you may forgot all of that and read about Ford Cortina - a beautiful classic car.