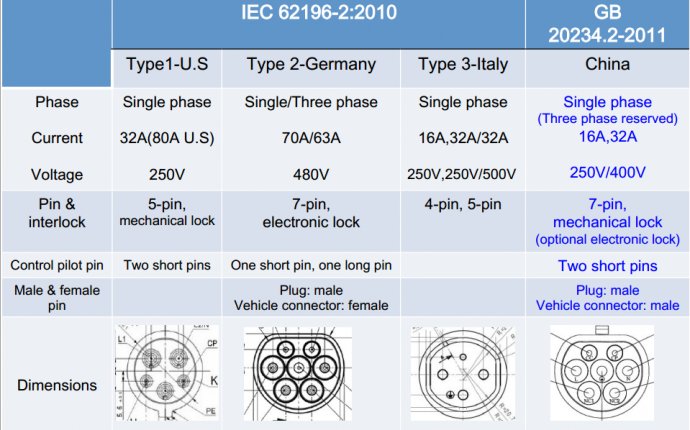 As BEVs and PHEVs increase in popularity, the current public EV charging infrastructure will also need to be scaled up to support the fleet. The lack of an EV fast charging standard further complicates the landscape, fragmenting the already struggling infrastructure with several standards competing for dominance, and manufacturers are drawing lines in the sand and picking teams to determine which standard will reign supreme.

Where We Came From — Level 2 Charging

With the initial deployment of EVs, what we now call Level 2 chargers were deployed far and wide to incentivize the public to purchase electric vehicles. These chargers provide charging rates of 6.6 kilowatt-hours for each hour of charging. In a Leaf, that equates to around 24 miles of range per hour of charging. These chargers were a fantastic start at developing a public charging network and gave early adopters the confidence to purchase a $30, 000 vehicle with a reduced range.

Level 2 public chargers allowed people to extend the practical range of their EVs with just a few hours of charging required to top off their charge before heading on to another destination. Level 2 chargers are now installed in garages of many EV owners and the public network of chargers has only continued to grow as EV adoption has increased.

To complement these chargers, Level 3 chargers — or DC fast chargers — have started popping up. Level 3 chargers brought a significant advantage to the table in terms of charging speed and were able to push ~19 kWhs in a 30-minute session, equating to the addition of roughly 80% of the charge or an extra 76 miles of range. Charging rates slow as the battery nears the 90% full range, so, your mileage may vary.

DC fast chargers have grown into the gas stations of the EV charging network in most areas, as they allow ~80% charge in the time it takes to enjoy a cup of coffee or grab a bite to eat.

Similar to early Level 2 chargers, Level 3 chargers are expensive, with installations requiring significant electrical infrastructure in addition to a hardware cost upwards of $100, 000 each in the US. Due to the high capital cost required to install Level 3 chargers, early installations have been slower and mostly implemented by companies dedicated to charging infrastructure like NRG EVgo and ChargePoint. These chargers started popping up in major cities, then made their way into smaller cities across the nation.

Which brings us to today. In the southwestern United States, we have a healthy network of Level 2 chargers supported by a sprinkling of Level 3 DC fast chargers. On top of this mature network, EV sales have ramped up and are weighing heavily on our primarily Level 2 charging network. Many modern EVs are equipped with fast charging capability, with many supporting higher speeds than the current networks even provide. As we approach the next step change in EVs — with ranges of 200 miles requiring batteries of 60 kilowatt-hours and more — we are again approaching a point where even our fastest chargers today will not meet the needs of the masses. CHAdeMO plugs are the size of a large firehose, making its charging cables unwieldy, and it is the fast charging adapter of choice for the Kia Soul EV, Citroen, Mitsubishi EVs, Peugots, and of course, Nissan and the established Leaf (as an option). CHAdeMO offers charging speeds of up to 70 kW, with real-life 30-minute charging sessions delivering just over 19 kWh of charge or around 75 miles of extra range (on a Nissan Leaf). CHAdeMO is seeing extremely rapid adoption in Japan, with around 5, 500 stations deployed today (crazy considering how small Japan is!). The US — specifically, California — is ramping up deployment of CHAdeMO stations quickly as well, where over 1, 300 stations have been deployed.

Competing with CHAdeMO for the DC fast charging crown is the newer SAE Combined Charging Solution (aka SAE Combo, or CCS), which is a standard J1772 plug with 2 additional DC fast charging ports below it (hence the combo moniker). This newer standard is the fast charging standard of choice for Audi, BMW, Daimler, Ford, General Motors, Porsche, and Volkswagen. Most notably, this port can be found on the BMW i3, the Chevrolet Spark EV, and the Volkswagen eGolf. Combo adapters are similar in size to CHAdeMO, though due to the utilization of the existing J1772 plug, only require a single port on the car, whereas CHAdeMO requires 2 separate on-vehicle ports.

These Combo plugs offer maximum speeds of up to 90 kW (DC Level 2) with theoretical speeds of up to 240 kW. In real life, SAE Combo charge rates are comparable to CHAdeMO, delivering roughly 80% of the range of ~100 mile EVS in a 30-minute fast charging session.

Finally, the Tesla charging format supports all charging levels from Level 1 (normal wall outlets at 110 volts) up to the Tesla-only DC Supercharging network which boasts the fastest broadly available charging speeds, cranking up to 400 miles of range per hour (design rate) with a real-world miles delivered in 30 minutes of Supercharging sitting at 170 miles. This does not scale up linearly (170 x 2 = 340 miles of range delivered per hour), as charging slows when the battery approaches capacity — but it’s still extremely impressive and much faster than any other fast charging standard with a substantial deployed footprint.

The Tesla charging standard is also much more compact than the other standards and can be used for all charging speeds — from 110v wall charging @ 15 amps all the way up to Supercharging.

The Road to the Future

Where to from here? Ultimately, the market will decide which manufacturer and, thus, which standard prevails. Manufacturers are realizing the negative sales impact the current, scattered public charging network is having and building out branded charging networks. Much like the VHS vs Beta or the HD-DVD vs Blu-Ray battles of the past, fragmented landscapes rarely last for long. We will likely converge on a single standard, but the longer the transition is drawn out, the more consumers — and EV adoption rates — will suffer. We need a fast charging standard now to give manufacturers and consumers confidence in EVs long into the future.

Several clear paths exist — though, with sides having already been chosen, no option will be pain-free. An NGO or charging alliance could be formed as a neutral self-governing body to select a dominant standard moving forward. Though, this is challenging as these organizations cost money and offer little financial upside for participants. Government mandates can also create results and that feels like what may be required to unify manufacturers as an effort to protect consumers from non-value-added infrastructure fragmentation.

Whatever the path forward, the time for action is now. Consumers are calling out for a single EV fast charging standard to carry us several decades into the future….