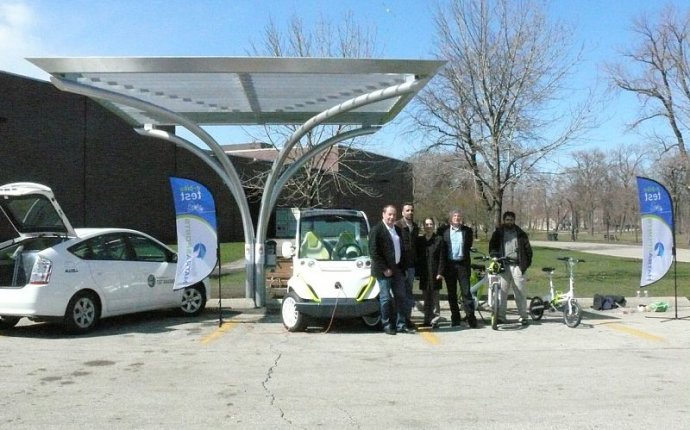 Since one of the reasons you invested in an EV or PEV was to give fossil fuels the boot, the last thing you’ll want is to continue powering it with dirty fossil fuel and nuclear-made electricity—common grid sources in nearly all parts of the United States. How about a PV system to charge your EV or PEV?

The type and size of PV system that can provide charging for a PEV or EV varies widely. Typically, a PV system for PEV charging is much smaller than one designed to serve an EV’s needs. You’ll need to consider battery capacity and your daily commute, among other things, to arrive at a system to meet your PEV or EV needs. For example, a Razor scooter will be running 36 V with maybe 20 Ah, requiring about 720 Wh. A Native scooter may have 48 V with 40 to 60 Ah (1, 920-2, 880 Wh), and the Roehr runs at 7.7 kWh. If you figure the estimated ranges of the bikes based on the manufacturers’ numbers, compared with the U.S. average daily commute of 16 miles, and consider battery capacity, you can design and size your system accordingly.

Full-size electric cars, with their higher- voltage, higher-capacity battery banks, will require much larger PV systems for charging. Typically, they’ll need a system that can provide about 12 kWh of daily charging energy.

EV owners might think about putting in a simple PV array to directly charge the EV batteries, since PV-direct applications can be the most efficient and least costly of all system types. But that kind of system would charge the vehicle only when the sun is shining—requiring you to drive only early and late in the day, and not being anywhere but at home during solar-charging hours—and the system may have to be oversized to deal with decreased sun-hours in winter and cloudy weather.

Another option for a dedicated EV solar-charging system might be a PV system with a stand-alone inverter and a battery bank. A battery bank would allow you to charge the EV at times other than when the sun is shining. However, the size of the battery bank depends on the EV’s charging requirements—with electric cars requiring a large battery bank, that could become a very expensive proposition. Off-grid, battery-based systems for smaller PEVs can be more economical.

With a batteryless grid-tied system, you can use the grid as a battery substitute. You can pump your PV-made energy into it year-round, and “draw” it out again whenever you need it: night or day, cloudy or sunny. Eliminating the batteries and other battery-related equipment removes substantial system cost, as does not needing to size a PV array to provide enough energy even on poor solar days.

A grid-tied system is even more attractive for its design flexibility. You can spend what you can afford, and expand your system later on. On the other hand, if you oversize the grid-tied PV system, you can also offset some of your household use in addition to the EV use. Or do what Kevin Johnson and Lisa Brown did with their oversized solar EV charging system, and get an electric yard tractor (see “Solar Electricity: At Home...and on the Road” in HP117).

Beyond the home, solar charging stations are under development across the nation. SolarCity, in cooperation with Tesla Motors, has planned a “solar corridor, ” allowing all-electric cars to charge at four locations between San Francisco and Los Angeles using solar energy. At the University of Central Florida, a PV-powered carport provides energy to charge electric vehicles by plugging them into an electrical outlet at the station. And in Plainville, Connecticut, General Electric’s EV Solar Carport produces enough solar energy to charge about 13 cars per day through six charging stations, as well as power the location’s overhead lighting. In addition to providing power or cars, the carport is also connected to the electrical grid, allowing it to send solar surplus power to the grid. Of course, to take advantage of these solar-charging opportunities, your daily commute destination will need to be close to a charging station.