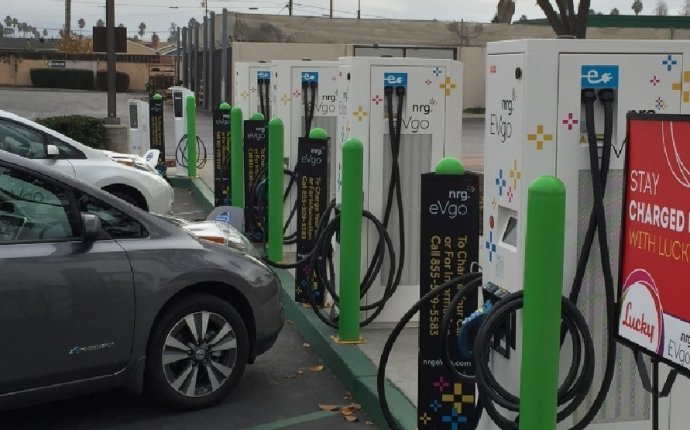 Sometimes gawkers stare from the sidewalk. Other times they walk right up to Linn Murphy's car and peer around.

Scott Goss wanted an electric car for years. When he saw the same public charging station in Atlanta, "I freaked out."

Now Goss drives a red Chevy Volt. He named it Sparkie. It runs on electricity the first 40 miles of each charge and sips gas after that.

Between Sparkie and the free public charging station, which is powered by solar panels, Goss saves about $130 a month in fuel.

"It was like they were giving me free gas, " he said.

Public charging stations are sprouting up across the country, often backed by public-private partnerships or businesses trying to lure customers who are waiting for their cars to charge.

They're also a lifeline for apartment and condo residents who want an electric car but have no way of charging them at home.

"I'm glad I found a charging station next to my apartment. I would have no options, living in an apartment, " Atlanta resident Aashish Mehta said.

Murphy, who lives in a condo building, carefully researched where he could plug in before buying his Nissan Leaf, a fully electric car that runs about 110 miles on a full charge.

But relying on public charging stations can come with inconveniences.

Instead of spending a few minutes filling up at a gas station, electric drivers running on empty must plug in for hours to get a full charge - though you can still "top off" an electric car by plugging in for a few minutes.

Those who have charging systems at home can simply leave their cars plugged in overnight. But for electric owners trying to get a full charge at a public station, the wait could be three or four hours.

That's where the placement of public stations is vital - not just for drivers, but for businesses that can cash in by luring drivers to their stores.

Though Goss now has a charging system at home, he prefers to plug in at Atlantic Station, a mixed-use development in Atlanta that has a grocery store, department stores, bars and restaurants.

Andy Wood, who bought an electric vehicle, or EV, to help the environment, makes a special effort to support businesses that provide him "free gas."

"I go out of my way and plan my trips around public charging stations. You're helping me ... so I'm paying you back with my loyalty and spending my business there, " he said.

The drugstore chain Walgreens is the largest retail host of EV charging stations in the country, with more than 400 plug-in sites in 18 metro areas, including Philadelphia; Baltimore; Tampa, Florida; and Portland, Oregon.

Depending on electrician and permitting costs, the stations can cost between $3, 000 and $15, 000 to install, said Suzanne Tamargo, a spokeswoman for Car Charging, the provider for Walgreens' stations.

But drivers say the network of public EV stations isn't nearly as extensive as it should be.

There are about 8, 000 public sites across the United States, a blip compared to the 150, 000 gas stations in the country. About a quarter of the country's public charging stations are in California, according to the U.S. Energy Information Administration.

Randy Stanley, who recently leased a Nissan Leaf and has a bumper sticker declaring, "This machine starves terrorists, " calls it a "chicken-or-the-egg" scenario - charging stations won't pop up unless there's demand, but some drivers are reluctant to get an electric car until they see more public stations.

The project, funded jointly by Department of Energy grants and partner matches, collects data on the usage of EV infrastructure to analyze how best to deploy charging stations.

"We're trying to figure out what are the issues, " said Colin Read, vice president of ECOtality, the manager of the EV Project. "We're trying to make charging a very ubiquitous part of your life."

He said the EV Project is trying to deploy a total of 5, 000 public stations and 8, 000 residential chargers.

The project also is testing different revenue systems for public stations. Read said the majority of public EV stations are powered by the electric grid and charge about $1 to $2 per hour.

Car Charging's Tamargo said Walgreens' stations vary depending on the pricing model, but New York City drivers can expect to pay $2.99 an hour, while those in states that permit charging by the unit of energy - California, Virginia, Colorado and Florida, among others - will pay 49 cents per kilowatt hour.

The cost to businesses supplying the electricity varies but typically runs about 50 cents to 75 cents an hour, Read said.

When the EV Project ends at the end of 2013, ECOtality will share its findings with policymakers.

Murphy has his own idea for expanding the public charging network.

"I would like for the network to be where every gas station you pull into, there will be electric stations. You can charge up in 15 minutes and be on your way, " he said. "The only way that's going to happen is for more people to get electric cars. The demand for charging stations will go up."