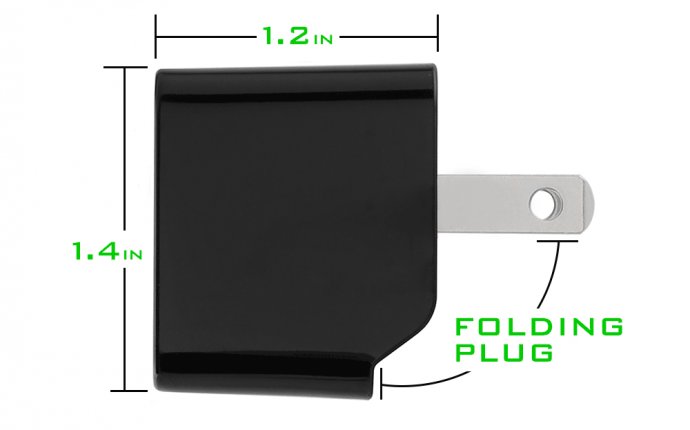 The Mili universal car/wall USB charger, tested in the lab

I received a Mili universal USB charger for review from Mobile Fun. This interesting charger has some features that make it my current favorite travel charger. It runs off both wall power and car accessory power. It comes with swappable plugs for Europe, UK, US, or Australia, and runs on 120 or 240 volts. It has two USB outputs - I thought this was pointless until I discovered how useful it is in car trips if two people can charge at the same time. In addition, one of the ports provides 10 watts for charging tablets (when plugged into AC). The charger also lights up - red indicates charging, and green indicates the devices are charged.

The charger has a few disadvantages. It is a bit expensive with a list price of $49. Measuring about 2 3/4 inches by 2 1/4 inches, it's much larger than Apple's super-compact inch-cube charger - although it has much more functionality. Finally, due to the design, it ends up blocking both outlets when you plug it into the wall.

In the remainder of this article, I test the performance of the charger both in the car and with AC power. To summarize, the power quality is excellent in the car, but has more noise than the average charger when plugged into the wall.

The Mili charger with adapters for different countries.

The label shows that when connected to AC, the charger is rated as 2.1A for output 1 and 1A for output 2; that is, it is designed to power an iPad from output 1 and a phone from output 2. When plugged in to a car accessory outlet, it is only rated to provide 1 amp, so charging a tablet will be slower. In the measurements below, I find that the charger's power exceeds these ratings when plugged into the wall, which is good, but provides a bit less than the expected one amp when plugged into a car output, which may make charging slower.

Label from the Mili charger.

Apple devices can reject "wrong" chargers with the error "Charging is not supported with this accessory"; Apple uses special proprietary voltages on the USB data pins to distinguish different types of chargers (details). I measured these voltages on the Mili charger and verified that it is configured to appear as an Apple 2A charger on ouput 1, and an Apple 1A charger on output 2.

You might expect to find 12 volts at your car's accessory outlet, but what comes out can be surprisingly noisy and variable. This voltage will have spikes from the ignition system as well as very large transients due to starting, malfunctions, or jump starting. A car charger must handle this hostile voltage input, and make sure the output to your device is smooth.

Test setup to measure charger performance in a car.

I measured the voltage in my car to see what happens in a real-world environment using the setup illustrated above. The Mili charger is plugged in just to the left of the gear shift. Above it is the USB interface board, which is connected to the oscilloscope on the dash.

The oscilloscope trace (yellow) on the left shows the large voltage fluctuations when I started the car. At the very left, with the ignition off, the battery provides about 12.5 volts. The starter pulls the voltage down to 8.88 volts until the engine starts. The voltage gradually rises over 6 seconds, settling around 14 volts. Performance of the Mili charger in a car

The Mili charger has a plug that folds out from the side for use in a car. While this makes the charger larger than a dedicated wall charger, having a charger that works both in the car and with AC is more convenient than I expected, especially when traveling.

I looked at the output of the Mili charger while starting the car, to see if the large voltage fluctuations shown above affected the charger's output. The Mili output remained steady, which is good. I also didn't see any of the ignition spikes in the output from the Mili charger. This indicates that the Mili charger does a good job of filtering out noise from the automotive environment.

I tested the Mili charger with inputs from 0 to 30 volts. 30 volts may seem excessive, but jump-starts often use 24 volts, and car electrical failures can result in a 120 volt "load dump". Fortunately, the Mili survived 30 volts just fine (unlike some other chargers I'm testing). The image below shows that the Mili generates a stable output voltage (horizontal line) for inputs from 7 volts to 30 volts. This is a good thing, showing that the Mili won't overload your phone even if your car is providing too much voltage. As expected, the Mili can't produce the full output voltage if the input voltage is too low (left side of the graph).

Output voltage (Y axis) of the Mili charger as the input ranges from 0 to 30 volts (X axis).

Next, I measured the voltage the charger can provide under increasing load (details). The horizontal line shows the voltage drops from about 5 volts to 4.5 volts as the load increases. The vertical line shows the charger maxes out around .9 amps with less than the expected 5 volts. This is slightly less than the rated 1 amp the charger is supposed to provide. Both USB outputs provide the same current when plugged into a car outlet.

Voltage vs Current for the Mili charger with 12V input.

I also examined the performance of the Mili charger when plugged into the wall (120V AC). One minor annoyance with using the Mili as a wall charger is that due to the position of the USB ports, both wall outlets are blocked either by the charger or USB cables.