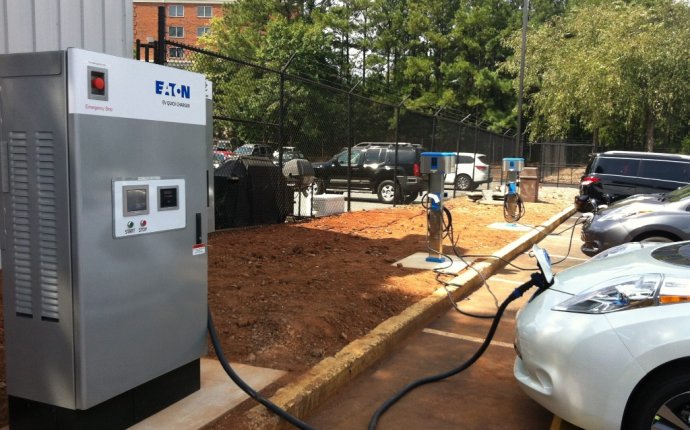 Cost: Most public stations let EV drivers charge vehicles for free, but some charge between $1 and $3 an hour.

Time: Charging can take several hours, depending upon the car and charger. The “Blink” DC chargers that will be installed in Buckhead can charge a car in a little as 15 minutes, officials say.

Numbers: There are 2, 000 in the 10-county metro Atlanta area, according to a club for owners and enthusiasts. (That only includes plug-in electrics, not hybrids that run on a mix of gas and regenerated electric power.)

Range between charges: 73 miles for the Nissan Leaf; 40 for the Chevy Volt, which has a small engine that can kick in if needed.

From an apartment complex in Midtown to a Buckhead gas station and an Alpharetta hotel, electric vehicle charging stations are popping up in greater numbers around metro Atlanta despite questions about how much they’ll be used.

Behind the rising numbers: a federal government program that pays part of the cost to homeowners or businesses that install chargers, with a goal of making them handy enough to encourage use of plug-in electric cars.

About 80 have been installed since August under the program, which aims to add 425 public and private charging stations in metro Atlanta by the end of April, according to the city of Atlanta. An unknown number, perhaps in the dozens, had been installed before the subsidy was available.

The program is available across the region, but the city is pushing businesses, shopping malls and other public places to install the chargers so “EV” owners can juice their vehicles when away from home.

Encouraging people to drive alternative-fueled vehicles is part of the city’s environmental and sustainability plan.

“Overall what the city is trying to really do is reduce its environmental footprint, ” said Denise Quarles, the city’s sustainability director.

Usage data from the chargers installed under the subsidy program will be collected through December.

“Realistically if we get 200 to 250, 300 installed, that will be fairly good, ” said Don Francis, president of the EV Club of the South. The club says there are 2, 000 electric vehicles in the 10-county metro area.

The $230 million U.S. program, called The EV Project, is funded with $114.8 million from the U.S. Department of Energy and matches from private partners.

ECOtality, the San Fransisco-based public company that was awarded the initial DOE grant to run the project, gives chargers away for free. It says the chargers are worth about $3, 000 because of their data-collection capability, while simpler models can be bought privately for as little as $600 for a home unit to $1, 500 for a business.

Under the federal program, homeowners get a $400 credit toward installation, which averages $1, 500. Businesses, including apartment complexes, get a $1, 000 credit.

Critics question why grants are doled out in the first place.

“The EV charger credit is just a variation on the old theme of robbing Peter to pay Paul, ” said Marlo Lewis, Senior Fellow at the Competitive Enterprise Institute, a free-market public policy organization. “What will make or break EVs is not special tax breaks but the price of gasoline and the success (or failure) of automotive engineers in overcoming the EV’s obvious drawbacks – limited range, high cost, and long recharging time.”

The limited range of current EVs on the market make charger availability important. The Nissan Leaf, for instance, has a range of 73 miles. The Chevrolet Volt can go for about 40 miles on battery power, though it has a small gas motor as well.

“Two years ago, it was definitely a risk (to drive far). People would get stranded, or charging stations wouldn’t work, ” said Chris Campbell, who bought one of the first Volts just as they hit the market in December 2010. He’s noticed a surge in charger locations.

“Now, to get stuff done in Atlanta, just driving around, (finding a charging station) is not really an issue anymore, ” said Campbell, who lives in the Lake Claire neighborhood in DeKalb County, a few miles from his job downtown.

Backers say many industries, including mature ones such as agriculture and energy, are subsidized in one way or another. Incentives can boost demand and propel breakthroughs, they say.

“The more infrastructure we put in place, the more affordable the vehicle is, the more likely the sales will increase, ” said Brendan Jones, marketing director for Nissan’s Leaf. The company said it sold 200 Leafs in Georgia last month, its best so far.

“Atlanta has reached a critical mass of EVs on the road, ” said Greg Fioriti, chief revenue officer for ECOtality.

Francis said he recently spoke with an Alpharetta-based property management company deciding whether to install EV charging stations at buildings it manages. He said the most interest comes from businesses along the Georgia 400 corridor and the Perimeter Mall area in Dunwoody.

Private groups are also getting word out about available federal money. The Buckhead Coalition recently helped match the owner of a Chevron gas station on Piedmont Road with ECOtality. Two chargers, including one that can charge a vehicle in 15 minutes, are planned for the station.

“To be able to have a green community is uppermost in people’s minds today, ” said Buckhead Coalition president and former Atlanta Mayor Sam Massell. “You’ve heard the stories: why buy an electric car when there’s no place to charge it? And then why put in an electric charger, there aren’t enough electric cars? It’s a chicken and egg thing.”

Charging station use varies wildly. Currently no residents are leasing either of the two EV charging spaces at Post Properties’ Post Alexander in Buckhead, which the Atlanta-based apartment community developer proactively installed in the fall of 2011.

But representatives for Atlantic Station and the Ponce City Market — installed in August 2011 and December 2012 respectively — say those charging stations are used throughout the day. Those projects were done separately from the DOE program.

Atlanta joined the program last August, two years after it started with grants from the American Reinvestment and Recovery Act. The goal is to install 5, 000 chargers in 21 metro areas and collect data on how frequently people use them by the end of 2013.