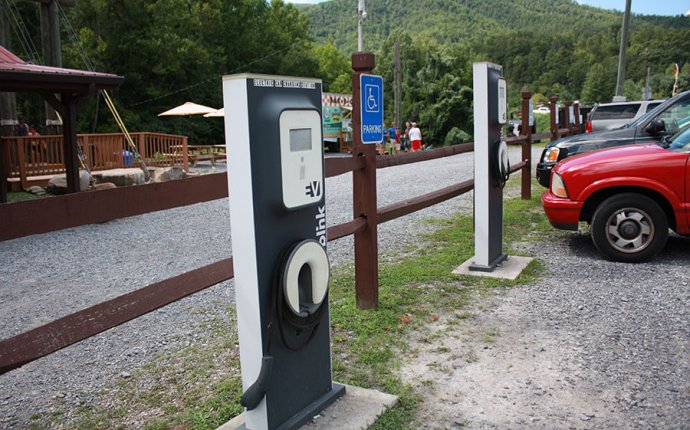 In the city of Eugene’s public parking garages, for example, each charging unit is used an average of once every two weeks. Springfield officials want seven charging units removed from downtown because some are little used and others are broken.

In 2013, the last year that data were collected for the federal government, electric vehicles throughout Oregon were plugged into public chargers installed through The EV Project just 4 percent of the time, compared with 42 percent of the time at home-charging units.

The same pattern is true in the eight other states and District of Columbia where the devices also were installed by the federal government, at a total cost to the taxpayer of about $100 million.

The largest deployment of charging stations in the world, it’s aimed at supporting the introduction of the all-electric Nissan Leaf and electric and gasoline-powered Chevrolet Volt to help end the nation’s reliance on internal-combustion-engine vehicles.

In Oregon, as part of The EV Project, the federal government spent more than $5 million buying, distributing and installing more than 1, 100 charging devices at the homes of electric-vehicle owners and in places accessible to the public.

The EV Project’s public chargers were meant to ease consumer concerns about the limited range of vehicles that rely all or in part on battery power.

Motorist “Range anxiety, ” or concern about being stranded with a depleted battery, was considered to be a major barrier to popular acceptance of electric cars, said state Sen. Phil Barnhart of Eugene.

That made it important to install as many publicly available charging stations as possible, he said.

“When they installed these (quick chargers), they were trying to encourage people to look at electric vehicles, ” Barnhart said. “They wanted people to say, ‘Maybe we should buy one of these things.’ These gadgets have served their purpose very well.”

But the results from The EV Project appear mixed, others say.

The EV Project bought and deployed mostly “Level 2” chargers that can resupply an electric vehicle’s battery in three to six hours, compared with the portable “trickle chargers” provided by carmakers, which can take from 10 to 20 hours.

Most days, electric-car owners prefer to plug in their vehicles at home, both for the convenience and the lower cost of residential electricity compared with what they would pay at the public charging units operated by for-profit networks.

The EV Project rushed to deploy the chargers to coincide with the introduction of electric vehicles and struggled to find publicly accessible places to put them. Large employers and other property owners were reluctant to dedicate parking spaces for charging stations in workplace parking lots, observers said.

EV project representatives found “it to be a challenge to get these in place at private locations, ” Jeff Petry, Eugene’s parking manager said in 2011.

That left Eugene, Springfield and other public entities among the property owners willing to accept the devices from the federal government and its contractor, EcoTality, a maker of the charging units. And that led to their installation in public parking garages and lots.

“They were put in the wrong places. That is why they are not being utilized, ” said Wahid Nawabi, a senior vice president of AeroVironment, a California-based maker of battery-charging devices and operator of a charging network.

Price and other electric-car owners got the charging equipment put in their homes for free, including needed electrical work, paid for by the federal government and EcoTality.

Price said the free device and related electrical work saved him more than $1, 000.

In return, electric-vehicle owners agreed to let their energy use and driving habits be monitored.

The data was sent to and analyzed by Idaho National Laboratory, which is affiliated with the federal Department of Energy.

Even with the federal government providing the charging-station hardware, the business of running and maintaining the units turned out to be a money loser for EcoTality, which had installed the units and established the Blink network of chargers in Oregon and the other states involved in The EV Project.

Government officials expected the San Francisco-based firm would invest $110 million of private funding to install the residential units and establish the public network.

EcoTality expected to become profitable, partly through the sale of electricity to electric-car owners through its Blink network of charging stations, but that failed to happen quickly enough.

In 2013, staggering under debt, EcoTality went bankrupt. The firm’s assets, including the Blink network, were acquired in 2013 by Miami-based Car Charging Group, making it the nation’s largest electric-vehicle charging company.

Yet that firm also is struggling financially, having lost nearly $11 million in the first six months of 2014. The firm’s financial status adds uncertainty to the network’s future.

The federal government initially paid for the purchase and installation of the vast majority of the Level 2 public charging stations in Oregon, but the ownership of the equipment varies. Some units are owned by property owners, including government entities. Other devices are owned by Car Charging Group.

Springfield officials last year asked the Car Charging Group to move seven of the 10 Blink chargers from downtown because some of them are barely used and others are broken.

If the company complies, the devices may wind up at Willamalane Park and Recreation District facilities or at hospitals, said Courtney Griesel, of the city’s economic and community development division.

Officials hope the chargers are better used in new locations, she said.

But the city has had difficulty getting cooperation from Car Charging Group, Griesel said.

“I imagine they have taken on quite a backlog of equipment and work, ” she said. “We want to work with them, but their responsiveness leaves something to be desired.”

In Eugene, 14 public charging stations are downtown, including in four city parking garages. The city of Eugene owns the units, plus two others at the Hilyard Community Center.

In Springfield, however, the chargers are owned by the Car Charging Group. Springfield officials declined to own the units, mainly because of concerns about their long-term maintenance, Griesel said.