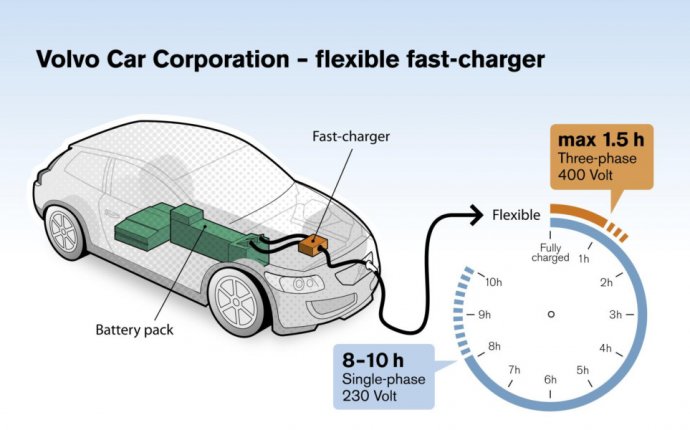 Electric vehicles take too long to recharge. To charge a Tesla Model S just halfway takes five hours at a typical home or public charging station. But in its effort to make electric vehicles more practical, Tesla Motors is quickly reducing the charging times. Last September, it unveiled a network of “supercharging” stations—designed exclusively for its Model S and future electric vehicles—that could charge a battery halfway in 30 minutes. In May, it announced an upgrade that cut that time to 20 minutes. Now Tesla’s chief technology officer, JB Straubel, says the company eventually could cut the time it takes to fully charge the battery to just five minutes—or not much longer than it takes to fill a gas tank. Straubel isn’t referring to the battery swap technology Tesla recently unveiled (see “Why Tesla Thinks It Can Make Battery Swapping Work”). That system doesn’t charge batteries quickly. It simply takes out a depleted battery and replaces it with a fully charged one. He’s talking about what might be a more appealing option for drivers: recharging the battery in your car while you wait.

“It’s not going to happen in a year from now. It’s going to be hard. But I think we can get down to five to 10 minutes, ” Straubel said in an interview with MIT Technology Review. He noted that the current superchargers, which deliver 120 kilowatts of electricity, “seemed pretty crazy even 10 years ago.” Conventional public charging stations deliver well under 10 kilowatts.

Tesla is far ahead of its competition with its supercharging technology. For example, the most popular fast-charging technology today is based on the Japanese Chademo standard, which enables 50-kilowatt charging. Even SAE International’s brand-new fast-charging standard, which was finalized in October and is being adopted by major automakers such as GM, tops out at 100 kilowatts.

One reason Tesla has pushed the technology so aggressively is that its battery packs store more than three times the energy of its competitors’ electric-car batteries. As a result, they require more power to charge quickly, says Arindam Maitra, a senior project manager at the Electric Power Research Institute.

Straubel says Tesla has been able to rapidly improve charging because it designs and builds all of the key components itself, including the chargers, the electronics for monitoring the battery pack, and a cooling system for the battery. They’re all optimized to work together in a way that’s not easy for systems built to accommodate many different models of electric vehicles.

If an electric car is plugged directly into a wall socket, on-board chargers take AC power from the wall, convert it to DC, and regulate the power delivered to the battery. Fast charging or supercharging bypasses the onboard charger; the AC-to-DC conversion happens outside the vehicle.

One challenge of fast charging is that delivering power to a battery very rapidly can cause it to overheat. To avoid damaging the battery, the outside charger needs to communicate with the electronics that monitor the state of the batteries, including their voltage and temperature, and quickly adjust charging rates accordingly. “To do that kind of charging, everything has to be designed and working in perfect synchrony, ” Straubel says.

Achieving five-minute charges will require not only further improving the charging system, but also improving the interface with the electrical grid. As it is, only some places on the grid can handle 120-kilowatt charging. Drawing large amounts of power from the grid also incurs demand charges from the utility, increasing the cost of the system.

But Straubel says that Tesla plans to get around these problems by equipping supercharging stations with solar panels and batteries.