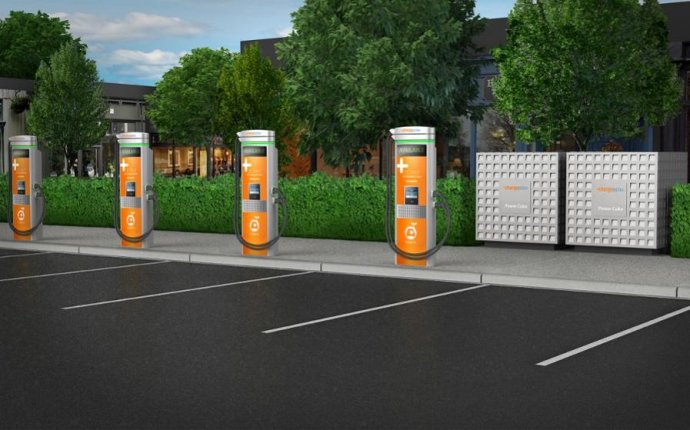 EVgo wrote in a press release:

“The new chargers being installed are seven times faster than any fast chargers currently available and represent a new level of convenience for EV charging.”

Of course, that’s the potential total output of the chargers, but there’s no electric car currently available that can even take the Supercharger’s 145 kW, never mind, 350 kW, but the station will be “future-proof” for upcoming electric vehicles – just like the new network in Europe mentioned above.

The new station (rendering above) will link Southern California to Las Vegas:

It will include four High-Power DC fast chargers capable of up to 350kW each, and will be able to accommodate expansion of up to eight chargers in the future, according to EVgo. The new system will be compatible with CCS and CHAdeMO charging standards. The site will also feature backup battery packs for energy storage powered by a solar canopy.

A little back of napkin math on those 350kW: That’s a max of 35kWh of charge in 6 minutes, roughly equivalent to 100 miles in most EVs. That means a typical 3 hour drive fill up can be had in about 10 minutes which is damn near the energy transfer speed of a gas station pump.

“It’s not going to happen in a year from now. It’s going to be hard. But I think we can get [charging times] down to 5-10 minutes…Current superchargers, which deliver 120 kilowatts of electricity, seemed pretty crazy even 10 years ago.”

While the company says it is breaking ground today, EVgo doesn’t expect the project to be completed until June 2017 – but again, it doesn’t really matter until a vehicle capable of charging at those impressive charge rates can make it to market. We still expect that several similar projects will be announced in the near future.